Should You Upgrade to Windows 11? 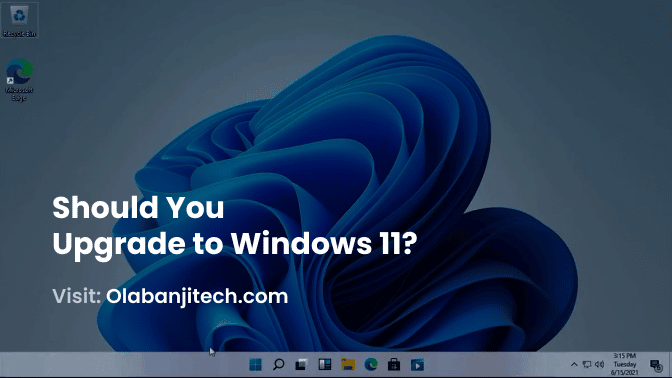 Microsoft released Windows 11 in October 2021, and since then, it has been patched and improved on a regular basis. A lot of people have been trying to upgrade to Windows 11.

Early users of Windows 11 may have thought they had to cope with an almost unending array of issues, but Microsoft has been working to improve the flaws in Windows 11.

That raises the question: Is it time to update to Windows 11 in order to ride the hype train? It's a question I hear often, typically when someone notices the Start menu in the middle of my laptop's screen.

In general, my response is Sure, if you're interested. However, it depends on the kind of PC you have and what you use it for.

Microsoft's ambition for the next generation of PC operating systems is Windows 11, which is essentially a more streamlined, secure, and user-friendly version of Windows 10. You may want to wait a little bit longer if your computer doesn't match the minimal hardware requirements or if you've optimised it for one particular application, like gaming or video editing.

However, if your computer complies with Microsoft's exacting Windows 11 system requirements and you don't mind the sporadic software and hardware compatibility difficulties that come with a new operating system, now is an excellent time to update. To learn why to keep reading.

Read Also: How to right-click on Chromebook

Microsoft's ambition for the next generation of PC operating systems is Windows 11, which is essentially a more streamlined, secure, and user-friendly version of Windows 10.

You may want to wait a little bit longer if your computer doesn't match the minimal hardware requirements or if you've optimised it for one particular application, like gaming or video editing.

However, if your computer complies with Microsoft's exacting Windows 11 system requirements and you don't mind the sporadic software and hardware compatibility difficulties that come with a new operating system, now is an excellent time to update. To learn why to keep reading.

How to check if your PC is compatible with Windows 11

There is a technique to verify your computer's hardware if you're not sure what it has or if you want to be sure you can update to Windows 11 when the time comes.

The Windows 11 banner must be found at the top of the page and clicked after the programme has been installed and opened.

Your PC's ability to run Windows 11 will be instantly apparent through the Health Check programme.

PC Health Check is back and much more helpful at explaining why your PC isn't ready for Windows 11. The software was initially rather useless, which led Microsoft to take the service offline for a period.

Let's briefly go through the main new features(opens in a new tab) that are exclusive to Windows 11 before we discuss whether or not you should update.

Here are the significant changes that are important to be aware of, even if there are an almost unlimited number of smaller changes that influence everything from the layout of menus to the position of certain settings.

Redesigned visuals: Windows 11 now adheres to Microsoft's Fluent Design language, which places an emphasis on rounded edges, centred text, and larger, more vibrant icons. Almost every area of the operating system has been redesigned to match this style.

A large portion of the interface is simpler to use on a touchscreen, and it adapts much more smartly when displays are connected or disconnected. Hey, even Windows programmes like Notepad now have a Dark Mode.

The Windows 11 Start button now opens a new, more streamlined Start menu in addition to being by default positioned in the middle of the taskbar (although you may move it back to the left using the Taskbar settings menu).

There is now a visible search bar atop two straightforward, customisable sections: one for pinned programmes and the other for files and apps that Windows 11 suggests for you (like recently-opened files).

The new Widgets menu in Windows 11 allows users to launch a pane of automatically updated widgets and news items from the left side of the screen. Although it's a nice feature, in my opinion, it's not really useful.

New tools for controlling desktops and windows: One of my favourite new features in Windows 11 is Snap Assist, which makes it much simpler to arrange the windows on your desktop.

Simply place your cursor over the minimize/maximize button in the top-right corner of any programme window, and Windows 11 will display a choice of alternative window configurations for you to choose from.

A useful method to separate work from play is to utilise the new Task View button on the taskbar to arrange and transition between various Desktops.

While this functionality was initially unusable, it is now possible for Windows 11 users to test out Android applications in a restricted capacity as Microsoft gets closer to releasing full-fledged native Android app compatibility for Windows 11.

If you and your computer are prepared and willing to update to Windows 11, you should do so.

Really, for the majority of us, that's all there is to it. The only possible obstacle is your fear of change since, if your PC is eligible, upgrading from Windows 10 to Windows 11 should be free.

While some of that anxiety may be justified, I believe you'll find Windows 11 to be a relatively unoffensive operating system overall. Despite having extremely demanding system requirements, the updated Windows seems to be quite similar to Windows 10, and after using it since its release, I can attest that it is entirely functional.

When you upgrade, the new design will be the most noticeable change: The desktop and taskbar are still there in Windows 11, but in addition to the Start button, additional buttons have been added, and they are now all centred on the taskbar rather than being grouped in the left corner.

For organising windows on your desktop, there are also some handy additional choices. It is now simpler to group and organise open applications on your desktop using Layouts and Groups thanks to a new feature from Microsoft called Snap Assist.

There's absolutely no excuse not to switch to Windows 11 right immediately, however, if you're still on the fence.

Many of Windows 11's essential features, such as Auto HDR and virtual desktops, as well as crucial updates and security fixes, will be available to Windows 10 users until 2025.

Who knows, but Windows 11 ought to be in a better position by then. Perhaps then, we'll begin to speculate about what Windows 12 could look like.