Samsung Galaxy Note 10 vs. Note 10 Plus: Which one should you buy? 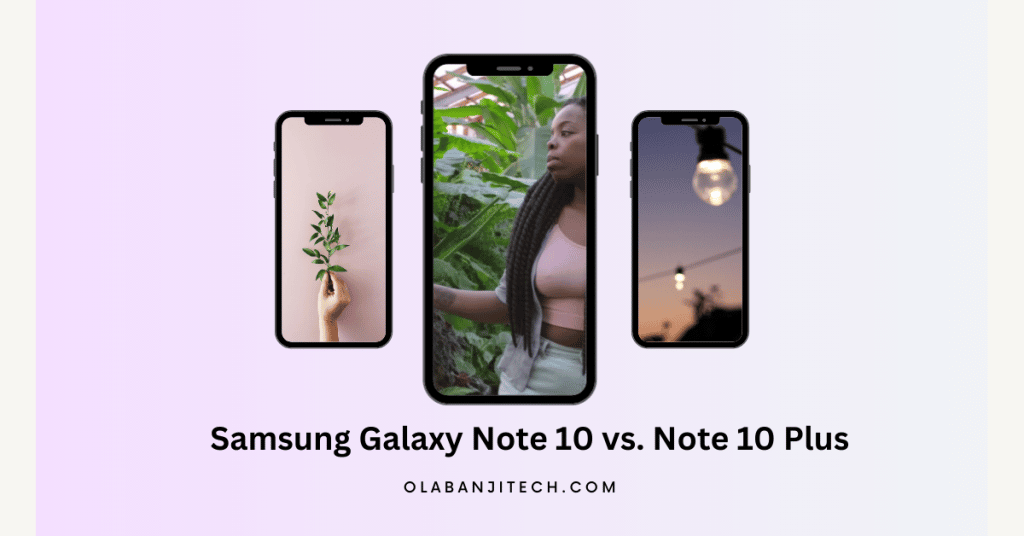 However, this is just one of a number of differences between the two phones. Further complicating matters, the Note 10 starts at $949 while the Note 10 Plus starts at $1,099 If you're trying to decide which new phablet to buy, here's how they compare.

The Note 10 and Note 10 Plus are mirror images of one another in terms of design. Both have Gorilla Glass 6 coatings and metal frames. They boast nearly bezel-less displays with top-mounted Infinity-O hole-punch front-facing cameras. Both devices lack headphone connectors for the first time in Note history.

As a result, size alone, not design, is to blame for the differences. A 6.3-inch screen on the Note 10 is more than sufficient, but the 6.8-inch display on the Note 10 Plus dwarfs it. This results in the Note 10 Plus being slightly heavier than the standard model—it is around an ounce more. No matter which model you select, the S Pen stylus is the same.

The most recent Samsung Notes have rounded sides but sharp corners, making them slabs in every sense of the word. Both of them will be offered in a range of colors, such as black, white, blue, and the newest Aura Glow. That color choice has a shine that resembles a mirror and reflects light in a spectrum of colors. Markets outside of the United States will also have access to certain more colors, including red.

In addition to having varied sizes, the screens on both Note 10 models are slightly different. Both handsets utilize Samsung's Dynamic AMOLED technology, but the Note 10 Plus' panel offers a higher resolution to fit the extra half inch of space.

The 6.8-inch Note 10 Plus sports a Quad-HD+ panel, which is 1440p, and the 6.3-inch Note 10 has a 1080p, Full-HD+ screen. The Note 10 Plus's screen has 498 pixels per square inch, compared to the Note 10's 401, when comparing the screens' pixel densities. With a difference of roughly 100 pixels per inch, the Note 10 Plus displays text and images that are more well defined while also making it more challenging to distinguish individual pixels.

The Note 10 follows Samsung's Galaxy S10 series by adding a third camera lens to the rear, increasing the total to three in the base model. Two 12-megapixel wide- and telephoto cameras combined with one 16-MP ultrawide lens should provide the ideal field of vision for taking landscape pictures. The 10-MP selfie camera of the phone is found on the front.

The Note 10 Plus has the same set of cameras as the Note 10, but Samsung has given that model a fourth lens. Under the flash, there is a tiny time-of-flight sensor that is only utilized to determine depth and distance in three-dimensional space.

On the Galaxy Note 10 is Aura Glow.

Thanks to this fourth lens, which Samsung has dubbed its DepthVision Camera, the Note 10 Plus will be able to assess a better understanding of spatial relationships in various photography modes, such as when taking a shallow depth-of-field Live Focus picture.

Actually, Samsung introduced a comparable sensor in the Galaxy S10 5G earlier this year, and we found that it did allow the camera to shoot significantly better bokeh images with more accurate differentiation between the foreground and background of a given picture.

Why the camera specifications seem about the same is due to the fact that Samsung hasn't made many improvements to the Note 10 series' still photography over what the Galaxy S10 line offered this past spring.

The majority of the focus has instead been on new video modes like Live Focus for video and AR Doodle, which allows users to draw on top of individuals in the video feed.

Even though most people will probably utilize Live Focus video to blur backgrounds, both phones include a spot color feature that lets you keep the target highlighted while displaying their surroundings in black and white.

Read also: How to Take Screenshot by Tapping Back of iPhone

Contrary to reports that surfaced before Samsung's phablets were unveiled, which suggested they might use a faster Qualcomm chipset known as the Snapdragon 855 Plus, both devices ship in North America with normal 855 CPUs.

You might remember that the Snapdragon 855 was the processor used in the Galaxy S10 and several other high-end Android handsets introduced in 2019. All around the world, Samsung's Exynos 9825 powers every phone.