How to get rid of split screen on ipad 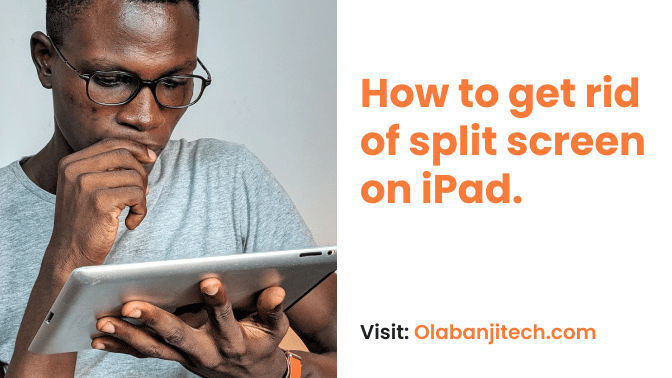 Do you want to know how to remove the split screen on iPad? On the iPad, Split View is enabled by default, and many users unintentionally wind up with a split screen, particularly in the Safari app.

Although there are numerous helpful ways to utilise split screen on the iPad, some users may not want the feature which is really called Split View and that's OK.

This article will demonstrate how to enable, disable, set up, and effectively utilise the iPad's split-screen capability.

This article will demonstrate how to enable, disable, set up, and effectively utilise the iPad's split-screen capability. We'll also answer a few frequently asked questions about this iPad screen-viewing application.

Read Also: How to turn off SafeSearch on iPhone

How to Close Split Screen on Your iPad

If you know how to utilise Split View when multitasking on your iPad, you can increase your productivity! There were two ways to end split screen on an iPad prior to iPadOS 15: either deactivate the split screen in iPad Settings or just shut the split screen for the app or applications you're presently using.

Simply sliding the divider bar in the direction of the app you wish to dismiss will undo the split screen if you mistakenly entered split view and are having trouble getting split screen on your iPad to stop interfering with your layout and making your app windows smaller.

It may be really helpful to have two open programmes side by side. It's particularly useful while doing research, working on a presentation, or creating a project since it reduces the need to constantly switch between the two as you work on them.

You may quickly disable the split screen on your iPad after you're done and no longer need the extra view. By doing the following, you may go back to single-screen mode:

Additionally, you may want to read our article on how to force-quit a programme on your Mac if it is frozen.

Let's get started with these simple fixes so you may resume seeing your applications at their original size.

How to Stop Split Screen on an iPad from Happening Accidentally

Watch out for the three dots at the top of your app windows to prevent unintentional iPad split screens in the future! It's a good idea to be aware of this going ahead since accidentally moving this symbol will result in a variety of changes in window size and positioning.

You'll need to know how to leave a split screen on an iPad if your iPad is now only displaying a half-screen app view. You'll see how in the part that follows.

It's possible that when using your iPad, a tiny window may seem to be hovering above a full-screen programme. It has the same appearance and is referred to as Slide Over.

The majority of the time, this works, however, in reality, you are merely concealing the Slide Over window, not really shutting it. Even after hiding it, you can still access it by swiping back from the screen's border on the side where you concealed it.

To completely collapse a Slide Over window, hold your finger on the top control bar and gently drag it toward the border of the screen until a split-screen view appears (called Split View).

The undesirable window may then be closed by dragging the black border between the two windows all the way to the screen's edge until it vanishes (see "How to Get Rid of Split Screen on iPad" below).

A brand-new iPad multitasking feature for iOS 10 is Split View in Safari,1https://support.apple.com/en-ng/HT207522 which is still present in iPadOS 16. Split View on the iPad lets you open two different Safari web pages at once, which has a lot of advantages!

The same as previously, touch and drag the black divider bar to either side of the screen to return the iPad to full screen from the split-screen Safari mode.

I hope this little journey down iPad split-screen memory lane was enjoyable for you! Now that you're prepared, you can deal with Split View the next time it inadvertently shrinks your iPad's Safari window or awkwardly smushes two applications together.

Because of its many capabilities, the iPad might sometimes seem like a desktop or laptop replacement.
Split-screen multitasking was a big advancement in utilising the iPad as a laptop when it was introduced by Apple
Unfortunately, it's challenging to utilise the split screen since it's so muddled and inconsistent depending on the app you're using.

Consider the scenario in which you have two applications open side by side. How do I return to the single-app view?

The multitasking option on the iPad also includes Slide Over. In contrast to Split View, it shows one programme in full-screen mode and the other as a little floating window on the side of the screen.

To make switching between applications simple, the iPad keeps note of the apps you launch in Slide Over. You may launch and use many applications at once thanks to this functionality.