How to get followers on spotify 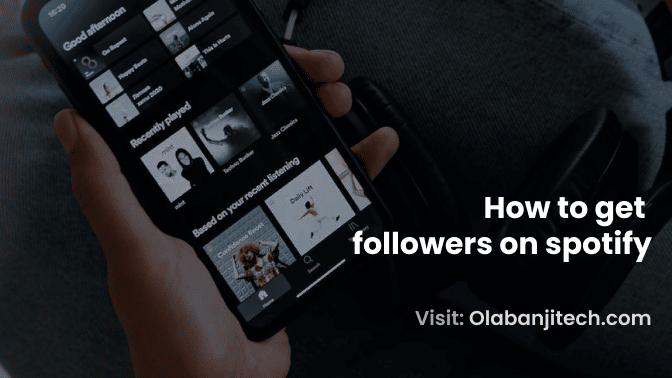 Believe me when I say it's really not easy to know how to get followers on spotify. I mean I've been there before and I understand what it means being a novice and trying to be heard.

The playlists on Spotify make me think a lot of the old CDs and cassettes we used to exchange and distribute when we were younger.

My friends used to build these types of playlists with a variety of songs by various artists and give out cassettes as gifts. The first time a buddy gave me a playlist he had put up on his own, it completely altered the way I perceived, appreciated, and experienced music.

I began creating my own recordings and delivering them to all the important people in my life. I believe that's how I developed an obsession with music because, long before I even realised what a soundtrack was, I discovered a way to make it the soundtrack of my life.

Making playlists makes me feel like I'm 13 again, choosing the perfect music for my crush's or my best friend's birthday celebration.

I also adore making them match certain emotions or moods because it makes me feel wonderful and almost like I'm toying with emotions.

Exchange of playlists is a fantastic method to find new music, both while creating the list and when listening to a fresh one.

The days of having to pay close attention when listening to great music in order to recognise the title are long gone. Now, all you have to do is pick up your phone to check the song that is playing and the singer.

My friends like it when I create fresh Spotify playlists because they get to learn about new musicians that they otherwise wouldn't be familiar with.

I began creating playlists more often and seriously as a result.

In the process, I became aware of something. What happens if you spend hours compiling a terrific playlist including stellar musicians, publish it on social media, and tell all your friends about it? then nobody pays attention to it?

Spotify has an algorithm, much like other social media sites. a mechanism for promoting Spotify-created material.

Spotify is a well-known algorithm, in contrast to other ones. BART, which stands for Bandits for Recommendations as Treatments, is the name of the programme.

Since you kind of has to play your cards very carefully, the Spotify algorithm aids in playlist promotion. You must take other steps as well to increase the number of people who follow your Spotify playlists.

I have discovered several secrets after doing months of study and speaking with various curators of Spotify playlists.

How to get followers on spotify (using playlist)

1. Make really targeted playlists: although "beach tunes" is a fine topic, don't you think it's a little too broad? Does that playlist work on those particular beach days? A family beach day is not the same as a spring break beach day with your buddies.

When making your playlists, particularly if you want to add your own music to them, keep that in mind. As you create your playlists, consider your target audience and the circumstances in which they will be listening. Remember! Even the most recent songs on Spotify have their roots in intricate data, so there are more opportunities for new songs, albums, and playlists to be discovered by listeners who would likely like them.

Create a playlist for your intended audience if you want to increase the number of Spotify playlist followers since this will maintain the algorithm in your favour.

2. Don't forget the classics: If there is a playlist to which you can include a few old, timeless songs, don't be hesitant to do so. People never grow weary of listening to their favourite music. If you give the radio some time, you'll hear songs that have been popular for almost 20 years. Additionally, you will hear some oldies on the most well-known Spotify playlists, so keep them in mind.

3. Quality versus number: When it comes to Spotify playlists, quantity is a hot subject. In fact, there is considerable debate over it among Spotify curators. Some suggest you should only create brief playlists, while others claim it doesn't really matter.

Although I've personally seen well-known Spotify playlists with hundreds of songs become wildly successful on Spotify, I've also seen some relatively brief ones do the same. In any case, it's crucial to prioritise quality over number; you want people to appreciate each and every song, not just a select few!

Therefore, use extreme caution when choosing the songs you include; if they do not include all of your favourites, they fail the test.

You can also get Spotify followers from Facebook1https://www.facebook.com/groups/34510656142/, watch the video guide below:

So, you know how to create a playlist with a big chance of growing. Still, there are a lot of things you can do to grow your Spotify playlist followers organically:

Why aren't you listening to your own Spotify playlist when you've made the ideal one for a day at the beach with friends or a collection of your favourite music for a special dinner?

Particularly when music comes to brand-new playlists, Spotify takes note when a playlist's producer forgets to update it. Make sure you listen to the playlist you produced often. Your Spotify following may begin to increase with only one simple tweak.

Now that you have a fantastic playlist and have considered your target demographic, what should you do next?

Related: How to repost on TikTok | Picture and Video Guides

We have become too used to things arriving right away and becoming viral on social media. After simply finishing creating playlists, we want a thousand followers each hour or a thousand likes per minute.

This is not genuine, and neither is this organic growth. Maintaining your composure and focusing on the daily tiny gains can help you increase your Spotify following.